Dænu has been active as singer & songwriter in a variety of projects and across diverse musical genres. Now, with “Einisch gseh mer üs wieder”, he is releasing his first single as a solo artist. 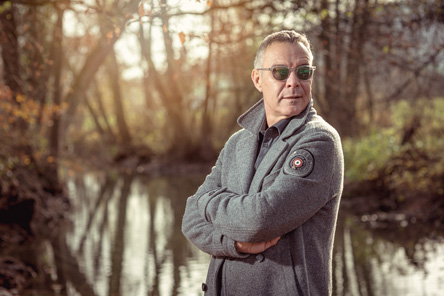 Dænu grew up in Bern, Switzerland, and thanks to a mother from Jura and father from Thun, regions of the country with distinct dialects, grew up billingually. He was only moderately enthused by piano lessons. However, at 11-years old, Dænu heard the band Rumpelstilz with their song “Muschle”, and he, grandson of yodeler, knew: I want to make music. A few years later he was standing before the microphone in a rehearsal room and singing; badly at first, but with much enthusiasm.

Since that day, much water has flown under the bridge, and Dænu has been active as singer & songwriter in a variety of projects and across diverse musical genres. For his own compositions, he is inspired by amongst others Polo Hofer, Florian Ast, Ritschi and Sandee. The texts of his songs are based on true stories and events, which Dænu works through almost like entries in a diary.

For his first single as a solo artist, Dænu has not chosen one of his own songs. Rather he has opted to record Andreas Gabalier’s ‘Einmal seh’n wir uns wieder’ (‘One day we’ll see each other again’) in a personal version, adapted into Bern Swiss German. The moving ballad ‘Einisch gseh mer üs wieder’ is about loss and the hope of reunion, and is for Dænu also a personal way of processing death, sadness and pain. It serves as a testament to all those who have lost a loved one.

Dænu was born in Bern, though he has lived for many years in the canton of Aargau. He is married, has three grown children and has newly become master to a ginger tomcat.

Here’s a short clip from the recording of “Einisch gseh mir üs wieder”: