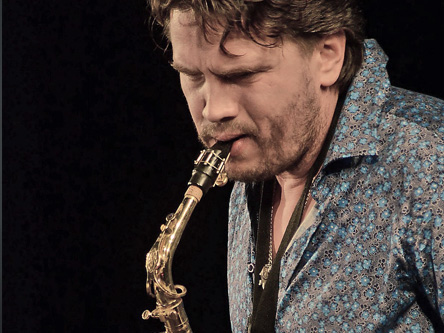 Nick appears on many albums, and together with his father he founded the international Vintskevich quartet with Joel Taylor on drums and Kip Reef on the bass (RUS/US). The quartet’s albums have earned excellent reviews from critics and music lovers around the world (“Singularity” SLAM 2009, “Russian Ornament” with Folk Choir 2013). Nick and Leonid regularly work with European musicians like Steve Kershaw or Petter Svard with whom they released the album “Songs From The Black Earth” in 2008.

Nick released his first soul, rhythm & blues and smooth jazz solo album “Vive L’amour” in 2011. The title song – authored and performed by Kim Nazaran – was particularly successful in the US, where it got a lot of airplay and was among the top ten tracks for two months on Aspen Public Radio 91.5, in Colorado, USA. In 2014, Nick was the runner-up in the Internet Jazz Competition „Made in NYC“, performing at the finalists’ Gala Concert with famous artists like Randy Brecker and Lenny White. In Germany, Nick got awarded JazzRockTV’s Miles Award for combining Folk, Jazz, Soul and Pop into a cross-cultural Fusion.

In January 2015, Nick signed with NiRo Music for his new album “Never Was A Doubt”.