The alternative rock band from Basel are checking back in after several years and they’re all grown up!
2017 could be the year for Slimboy! After signing the record deal with ‘NiRo Music’ at the end of 2016, the release of the band’s brand new studio album ‘Sail on Sailor’ and tours with ‘The Ataris’ and the ‘Greenfield Foundation’ are just around the corner. 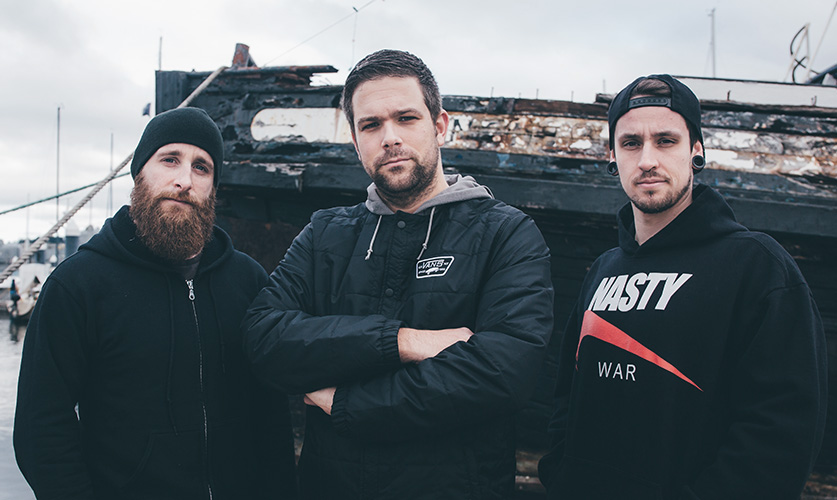 Shortly before the end of the year, the band travelled all the way to the US to record their fifth studio album in Mike Herrera’s studio (MXPX) in Seattle, Washington. The album goes by the title ‘Sail on Sailor’. Were the three band members inspired by the wet, gloomy weather of the west coast? According to the band, the album is about their most personal experiences so far and a lot has also changed in a musical sense. From punk-rock songs to soft ballads – a wide range of the band’s musical influences can be heard on the new album.

The band has been quiet for quite a while. But the three guys haven’t just been twiddling their thumbs the whole time. Quite the opposite! Between 2010 and 2015, Slimboy joined US punk-pop band MXPX. Together they toured the world with bands like ‘Hey Mike,’ ‘The Casting Out,’ ‘Fenix TX,’ ‘Piebald’ and ‘A Loss For Words’. At the same time, they started a side-project called ‘Cancer’ and from this came the EP ‘The Weight of the World’ and the album ‘Family, Music, Me’ (SONY MUSIC).

The band can already look back on a long and successful history:
In 2007, the Live DVD ‘Live at Basel City Studios’ was released and 2007 to 2009 was when the side-project ‘Cancer’ came about. Gigs with ‘Itchy Poopzkid,’ ‘Die Happy,’ the ‘Killerpilzen’ and ‘Jupiter Jones’ were the highlights of this time.
In 2005/2006, the fourth album ‘Anthems’ was released (produced by Clemens Matznick, RAMMSTEIN, DONOTS, GUANO APES, REVOLVERHELD) and the first international tour was approaching. Slimboy also joined the ‘Etnies Fast Forward Tour’ and played 25 cities across Switzerland.
Just like the current album, the third studio album was also recorded in the US. The title ‘No Fires on Beach’ (PHONAG RECORDS) also contains a reference to the location where the recording sessions took place, which was Sunny Los Angeles, California.

The band even achieved success in their first few years. Their first two albums ‘Yeah Yeah Yeah’ (2000) and ‘We hate Slimboy’ (2003) were released, a record deal was signed with EMI/Virgin Records, and Slimboy even performed as a support act for Oasis at the Hallenstadion in Zurich when they were still in their infancy (according to the legend, one of the Gallagher brothers liked what he heard). Slimboy also made their way into the Swiss charts.