The twin brothers Peter & Walter Keiser have been part of the Swiss music scene for decades as The Keiser Twins: as a rhythm band (bass & drums) they participated in numerous album recordings, concert tours, as well as radio and TV performances in Switzerland and abroad. 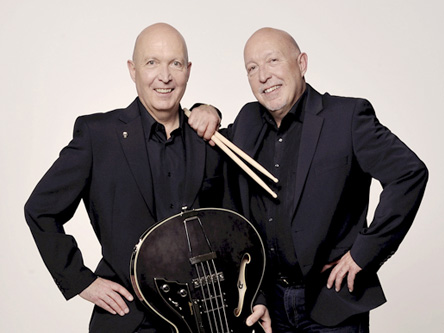 Peter & Walter Keiser (*1954) are the sons of the top-notch yodeler Martha Mumenthaler. But when the twin brothers joined the entertainment orchestra of Swiss Radio DRS under the direction of Hans Moeckel, neither one of them had any formal musical training. They gained their know-how by collaborating with more experienced musicians such as Victor Burghardt, and soon had the reputation of being “the two guys who can play modern”.

Exactly 30 years after the release of their first album, the twin brothers treated themselves to another original production: in collaboration with renowned British producer Andy Wright, they composed 10 vocal and instrumental pop songs that contain several elements of surprise and a hint of world music. The studio project also included Swiss artists Greg Galli (piano/keyboards), Daniel Küffer (sax), and Jean-Pierre von Dach (guitars), as well as the British artist Clinton Anthony “Roachie” Outten (vocals), and the South African Gavin Goldberg (vocals). The album was recorded in the Farm Studio Ebersol, mixed in the Southwest Studios London, and mastered in the MSM Studios München.