Hannah is twenty-one. She is a Swiss singer, songwriter and drummer and studies Voice Pop at the Zurich University of the Arts. Her debut album “More & Less” was released in September 2014 and contains eleven melodic pop-rock originals. 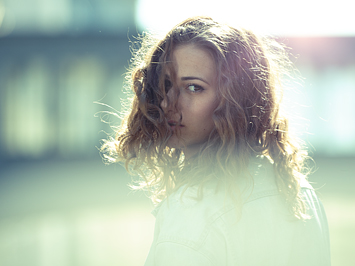 When Hannah was nine years old, she started taking drumming classes. In grammar school, she chose music as a major and studied with Orlando Ribar. During this period, the discovered her talent for singing and songwriting and decided to study music at university. Due to her talent and thorough exam preparation, she was able to gain the only study place for Voice Pop offered by the Zurich University of the Arts each year.

Hannah is an image-oriented person. Therefore, the English lyrics for her songs don’t just come to her but have to be worked for. With the aid of mental images and metaphors, the young woman describes the world and how she sees herself and others in it. The inspiration for her texts stems from personal events as well as from what is happening across the globe.

The music, on the other hand, comes from within: A melody in her head, a few chords on the piano, and the idea for a song is outlined. Throughout further musical elaboration, Hannah profits from the fact that she plays several instruments as well as from her studies, including those on music arrangement, musical theory, and ear training. All of this helps her to further hone her songwriting skills — and luckily so, because to Hannah, the musical mood a song creates is of vital importance, and in that respect, she’s an uncompromising perfectionist: If a musical idea of hers fails to work out in practice to her full satisfaction, she discards it without regret. What remains at the end of this process is a selection of melodious pop-rock songs with lyrics which extends beyond the worldview one would expect from such a young person and contains food for thought.