Estella Benedetti is the band that plays with the singer Estella Benedetti and the singer/songwriter as well as guitarist, Michael Giger. The two artists are longtime personal and musical partners and are well established on the Swiss blues scene. Currently, they are working on a new blues/Americana album featuring their own compositions that will be released by NiRo Music in the spring of 2018. 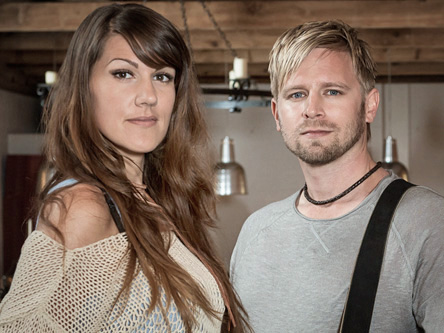 With the blues and soul album “Naked Soul”, released in 2010, Estella Benedetti & Michael Giger completed their first collaborative project. Three years later, they released a new ountry composition by Michael, the single “Returning back home”. In 2016, the two musicians recorded the blues-rock album “That Was Smokin'” in Los Angeles with John J.R. Robinson (drums), Neil Stubenhaus (bass), and Randy Kerber (keys). Through numerous live performances in Switzerland, Estella Benedetti is well known to audiences at home.

Currently, the band is working on a new album in the Americana genre – a fusion of folk, blues, new country, and pop, represented by big acts like Lady Antebellum, Tom Petty, and John Mayer. The band is especially moved by this style of music as it not only represents a particular emotion, but also “handmade” music with soul: real, spontaneous, and captivating from composition to performance.

The new album by Estella Benedetti will be released by NiRo Music in the spring of 2018. Musicians include: Estella Benedetti (vocals), Michael Giger (composition/guitars/vocals), Rafi Woll (drums), Richard Hugener (bass), and Mara Lustenberger (sax/backing vocals). The album is produced by Dave Hofmann in the SomaStudios, Zofingen. The cut “Higher” will be released as a single in the autumn of 2017.

The singer Estella Benedetti (born in 1979) began her musical career as a drummer and performed with her father already at a young age. While touring with a gospel choir, she discovered her talent for singing. She subsequently earned a degree in music education, studying at the Conservatory of Lucerne, the Academy of Contemporary Music (ACM) as well as the Swiss Academy for Music and Music Education (SAMP). At the age of 20, she opened her own voice studio in Lucerne, where she teaches to this day. Estella Benedetti is involved in a variety of music projects and is active as a live and studio musician.

The guitarist, singer, and songwriter Michael Giger (born in 1978) studied guitar and music education at the Lucerne School of Music. After earning an MBA, he now works as school administrator and instructor at the Lucerne School of Music. With the rock band “Infinite Dreams”, Michael Giger released the album “Touch my skin”, which features his own compositions, in 2003. Since 2010, he is a songwriter for Estella Benedetti. The guitarist is active as a live and studio musician in various collaborations and projects, and has worked with artists such as Gölä, Ina Forsman, Kirk Fletcher, and Bob Stroger.